The Inherent Unpredictability of Software Development

If it ain’t broke, don’t fix it, right? Wrong. This is the belief system of inexperienced software developers and businesses owners who are, in some cases rightfully so, worried about what problems any changes may cause. The reality though is that as a business owners, development manager or other, you need to make sure every aspect of software you are running is up to date at all times. Any outdated technologies in use can cause problems, likely have known vulnerabilities and security issues and will ultimately result in a situation whereby you are afraid of making any changes for fear of the entire system imploding on itself.

Ok, now I’ve got that out of the way, I assume you are now also of the belief system that all software needs to be kept up to date at all times without exception. If you are not convinced, then as a developer you need to come to terms with this quickly, or as a business owner you have not been in a situation yet which has resulted in a laissez-faire attitude to software updates costing you tens of thousands of pounds to remedy, much more expensive than pro-active updates and regular maintenance.

The biggest challenge software developers face at the coal face of the build process is the inherent unpredictability of software development. As a business owner or user of a software application, whether that is an online portal of some form, a web application, a mobile app, a website or something in between, what you see as a user is the absolute tip of the iceberg, the icing on the cake and this can paint completely false pictures about the underlying technology.

Anyone who has heard me speak on software development and technologies in the past will have no doubt heard my usual passionate exchange of words along the lines of using the right technology, investing seriously and stop trying to scrimp on costs. The reason I am always talking to businesses about this is not as part of a sales process designed to fleece someone of their hard earned money. No. The reason I talk passionately about this is because when businesses take on board the advice, this saves them a significant amount of money in the long run.

To build leading software products that your business relies on for revenue you need to be using the best underlying technology possible. And here lies the challenge. Any software product or online platform is built using a plethora of individual technologies that are working together seamlessly – at least in well-built systems. Below is just a very small sample of the individual technologies, frameworks, methodologies and systems that are often working together in the background to make a software product function as you experience as the end user. 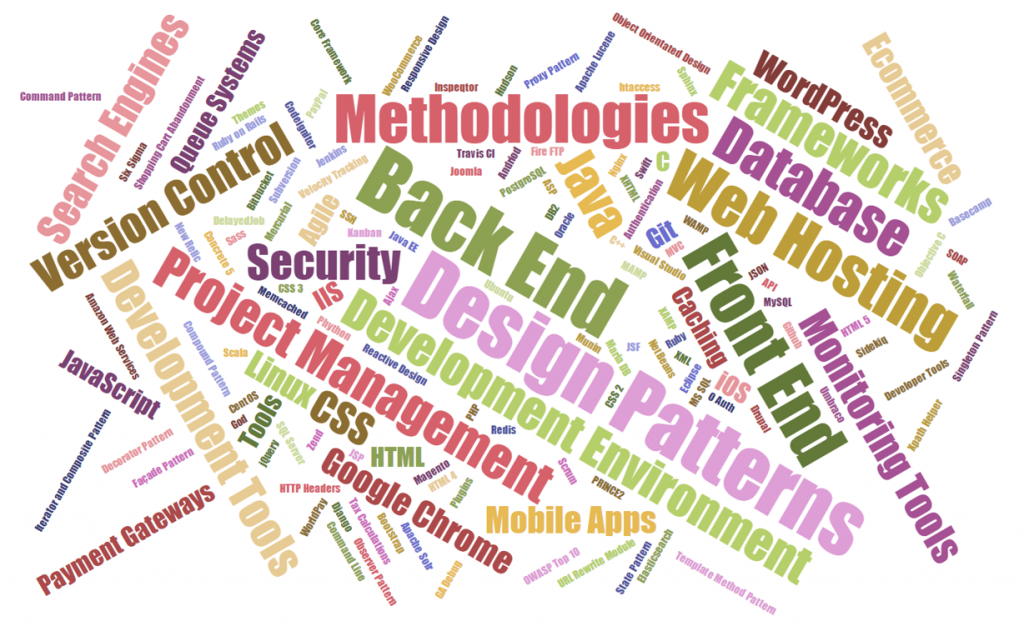 What this means though is that when something goes wrong, this often starts a chain reaction which impacts the entire system. This is the point when a user often likes to point out that “It doesn’t work” or “This {insert feature here} is broke”. And the reason something doesn’t work is often related to either a poor choice of technology in the first place or some form of incompatibility or conflict between different technologies.

To put this into a metaphor that is easier to digest, imagine an Olympic relay team. Now instead of having 4 people in this team, there were 30-50 people in this team. The team in this analogy is the software with the individual people being the pieces of software and technologies that make the software work. Now picture this. An outdated piece of technology as part of the team is the equivalent of having an athlete from 20 years ago who was once top of their game, but hasn’t trained in the last 20 years. They have put on a lot of weight, their fitness level is virtually zero and they can’t integrate as part of the team and generally have no idea what they should be doing. This is the same thing that happens with technologies. Ask yourself the question, would you really want this person as part of the team if you were relying on them to make your team the winning team at the Olympics? The answer is no. The same applies with software development.

Now to take the analogy one step further. Imagine that every member of the relay team is at a completely different level of fitness and experience. Each member of the team is interacting with different parts of the system, but often not all of the system at once. What this means is that when one of the athletes decides to seriously up their game and improve their performance, i.e. a piece of technology gets updated as part of the system, then this impacts other parts of the system in different ways. The reality of software development is that nothing is as linear as a relay team where person 1 passes the baton to person 2 and so on. The reality of software development is that often various pieces of technology will impact on many other pieces of technology and vice versa and often in a way that you cannot predict until an issue crops up.

So bringing this analogy back to software development in the real world. What this means is that when a new update comes out, for example, an update to the core Apple iOS operating system, for which all mobile applications rely on, then this update can cause problems if a key piece of technology is no longer supported for whatever reason. This seemingly small update from version 9.0 to 9.2 for example could actually result in a catastrophic failure which needs to be rectified for the mobile application to continue to work.

Here lies the challenge. As a business owner, IT manager or software developer, you have a choice. To update or not to update. To update leads you down the path of short term pain and costs to enhance the application with the long term benefits of a completely up to date piece of software. To hold off on updating leads you down the path of short term gain of not having to update anything with the long term implications being that over time as more and more technologies are updated your application is getting left in the digital dark ages, meaning that what would have been a simple upgrade previously has now resulted in a situation whereby a full or major rebuild of the application is the only way to go forward to bring the application back into the modern world. Remember the film Demolition Man with Wesley Snipes and Sylvester Stallone, when they stayed frozen in time for 36 years and how much the world had changed around them? If you haven’t seen the film, go and watch the 1993 classic, it will be a well spent 1 hr 55 mins of your time.

The number of interconnecting pieces powering any software product in the background is enormous and without serious planned maintenance and improvements things will start to go wrong, seemingly randomly, but in fact being caused by some form of automatic update somewhere along the lines. Just imagine a children’s playground at school if this was left unattended for 12 months with no form of teacher around to keep everything under control. The results would be utter chaos within no time. This is your software project. As a business owner, IT manager or software developer you need a conductor behind your software projects to ensure they are continually maintained and continue to function as you expect. It is a system and just like all systems of nature, they tend to prefer to eventually lead towards a system of chaos rather than order. There is a special branch of mathematics called Chaos Theory which talks about this in great depth should you wish to read into the topic.

As a final summary about the inherent unpredictability of software development. Everything needs to be kept up to date and a continual improvement process and development plan is essential that your software doesn’t get left behind. A stagnant software product in an ever changing digital world soon becomes out of date and needs a significant overhaul. What this does also lead to is the highly unpredictable topic of timelines and deliverables when dealing with so many unknown, unplanned and unpredictable changes that will be required as a continual series of improvements are worked through. What I can say is that any form of continual improvement is always far better than sitting back and leaving a system to work away. For any business owner who is reading this, when a software project is delayed, this is generally why. The world of software development is an ever moving and unpredictable goal post which requires your understanding. Good things come to those who wait.