How to Create a DOS Bootable USB

So, you’re probably reading this blog post after lots of searching online about how to do this, likely after lots of reading of hardware manufacturer’s documentation about how to upgrade firmware or similar. And you’ll probably also realise that we live in 2019 (at the time of writing….), so when a hardware manufacturer recommends you install some software on a ‘floppy disk drive’ you realise that the hardware world is stuck in the stone age. But hey. It is what it is, and we have to deal with this nonsense.

So, let’s figure out how to get this firmware upgrade onto a ‘floppy disk drive” aka a USB Drive!

A bit of background before we do though. It used to be pretty easy to boot into a DOS environment when Windows owned the world back in 1995. But things have changed a little since then and we have things like non-Microsoft software and other hardware made by many manufacturers around the world. This is great, but does complicate things a little.

Ultimately if you need to upgrade the firmware on a piece of hardware on a machine, then you need to Boot the Machine to your DOS USB (i.e. configure the Boot Priority in your motherboard BIOS to boot from your USB, not Floppy…., Disk Drive).

What this means in simple terms is that you need to have on your UBS Drive is the Bootable USB Operating System (more on how to do this shortly…) PLUS the Firmware upgrade files (likely a Shell or Bash or Executable file).

If you’ve simply tried to move the firmware upgrade files to the USB and boot directly to the USB drive with these files present you’ll be sorely disappointed as you’ll probably have received an error along the lines of “firmware upgrade shell load.exe is not recognised as an internal or external command”

What this basically means is that you cannot simply run the USB from Shell, but you must run the command from DOS instead. Semantics, but you’re working with underlying hardware here so you must be specific, so let’s create a DOS Bootable USB. 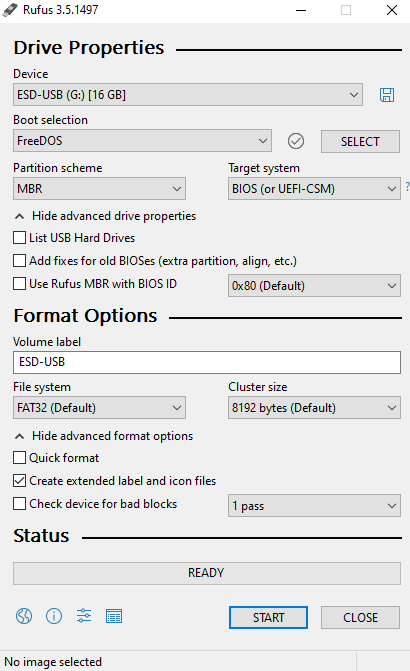 Prepare the Firmware Upgrade and Upgrade It

Basically, once you’ve created your DOS Bootable USB above, copy whatever files over to the same USB Drive as you’ll need to work with these once you’ve booted into the system.

Next, once you’ve booted into your DOS, simply run whatever commands your firmware upgrade tells you to.

And that’s it! This is a simple step 🙂